are you reading this?

Let me first start by sharing that Wes from Coast Range Cross Fit is in the games this weekend.. we would be cheering him on.. and in awe of all the athletes anyways.. but him wearing a Unravel Pediatric Cancer shirt gave a little extra boost!

Such a full day.

It started off with a friend coming over to talk Unravel stuff.. Since I felt like she was doing me a favor I wasn’t the mom I should have been.. the mom I want to be to the boys. Instead of getting off my lazy ass and getting them batteries for the bubble machine I kept just telling them to go off and play..

Two reasons that was hard for me.. First it made me hyper aware she is gone. I thought I had done such a good job raising kids content to go off and play on their own. But since the leader is gone its like they don’t know how to anymore. Second.. I clearly thought in my head I will just do it later. I know better than anybody….

lesson learned. I will not do that again. As soon as my (wonderful) friend left we did a easy craft.. next time I will have something set up for them to do to keep them happy. They should always be priority number one.

We ended up outside listening to music and having a dance party. Jonathan asked for “girl on fire” . Its his Jennifer song.. the one he chose for the picture video montage at her services. He asks for it a lot in the car but I tell him I cant choose what is on the radio. I realized that at home I can choose what we play. So we did that and Brave.. and then I wanted to see her video.

Me and my 3 youngest went inside to watch her it. Nicholas in typical 2yr old fashion just yells wanting to see himself. Charlotte still looks up when she hears her sisters voice and laugh .. and Jonathan.. he watches.

At one point I was standing and watching.. maybe swaying and singing a little to the song. He almost tackled me.. the force of his emotions barreling into me. It only took me a moment to realize what was happening..it was the same way he was at Camp Okizu. .

full of such sorrow and heart break.

tears a 4 yr old isn’t capable of understanding. .. it must be scary for him.

I held him then.. and I cried too… truthfully .. tears this 34 yr old isn’t capable of understanding.

Of despair for my two oldest.. the one in my arms and the one who died in them..

I told him how proud I was of him.. that he needed me and he came to me. That it was the right thing to do. That it is ok to hurt that deep.. to miss that much.. That’s my biggest message to both my boys.. that whatever they feel is ok.. happy… sad.. mad.. its all ok as long as they find the right way to deal with it. That family leans on each other.. He knows that … at 4 he has already held me as I cry. Been strong enough to support me. What a man he will **please God please God please** be.

They had some play-doh time and after some colors were mixed he said it looked like a heart. I told him it was just like my heart.. combination of colors.. early on after she died.. maybe even before a friend wrote talking about how she doesn’t think our hearts grow with a new child its more like adding in another color and mixing it around. So all of our kids have all of hearts. I want my living loves to always know even though she has my whole heart..they do too. The play-doh was a good visual of that idea..

Tony worked late so we ate sitting on top of the counters for fun .. Nicholas went potty and came back and wanted to put his pants on himself. He did it. But didn’t care about my kudos.. he ran to Jonathan wanting to be congratulated. I was ready to sharply whisper “say good job” ..

I didn’t have to.

In that moment it flooded back.. the way it was with her. They all just wanted approval from her and she was always so willing to give it out. The way he put down his crayon and looked at his little brother..and in a put on high pitched voice.”Good job Nicholas.”

The boys have been bickering.. his toe is on my chair kinda problems.. something that is uncharted territory for me. I have 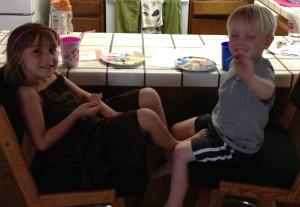 been working on a simple reward system for them. Do something nice for a sibling I draw a smily face on your arm.. both boys playing well together get a heart, (so they can only both get a heart) and extra good sibling acts earns a star. ..They are actually eating it up!

I walked around the bar to Jonathan and grabbed a pen and drew a smiley face for him.. and whispered to him how he proud I was.. how he was doing for Nicholas exactly what Jennifer had done for him. Just like us.. going there.. to the deep pain of missing her.. the feeling there are no words for seemed to make way for the best of him to emerge.

We decided to go for a walk. Nicholas got both of their shoes without being asked.. for those hours tonight I felt like us again. . imperfect in so many ways.. but my kids taking care of each other. At one point I cried. Nicholas with his now trademarked statement of

How good it felt to grab his chubby face and say no.. I’m happy … you made me happy.. he followed up with..

“not Jonathan” .. he is still 2 after all so even in the brightest moments he’s competitive like me!! and can always make me 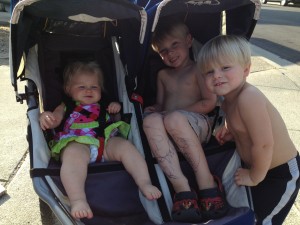 I snapped a pic of them out front ready for our walk..

and I remembered the last walk we had before we knew the clock was ticking.. might even have been our last family walk ever.  I had a glass of wine on our jammie walk.. I remember it had been a “long hard day”.. I was trying to turn it around.. How I miss that innocence. .thinking I had any clue what constituted hard. 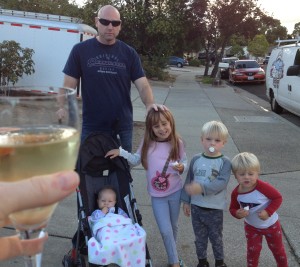 Our walk was more of the same.. the way they spoke to each other.. ran together shouting “running time” and “freeze”. It was like for this evening we were  …almost us again.

It felt simultaneously good and comfortable/hard and painful. To be so close to the family we once were I could almost touch it.. .. winding down my night now I am not sure how exactly I feel about all of it … to be so reminded of what was once so familiar..  Like how the cold hits so hard when you you get out of a warm bath. .. but if you go back in it’s never really the same.

it feels like she is being ripped away again.. or maybe its me.. just too terrified to let her in. Do I push her away? If I can’t have all of her I will accept none of her? I want to believe she was here helping them.. guiding them.. but I am so scared to. JLK reading to her brothers

Did you learn to really read honey? Are you reading over my shoulder every night as I cry and type?

I love you Jennifer. I miss you so very much. I am glad you are out of pain… really I am .. I just really really miss you baby girl.

44 Responses to “are you reading this?”